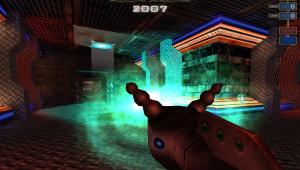 Do you like fast paced deathmatch? How about rich, colorful, arcadelike atmospheres? How about...retro Sci Fi? Then you're going to love what Alien Arena 2007 has in store for you! This game combines some of the very best aspects of such games as Quake III and Unreal Tournament and wraps them up with a retro alien theme, while adding tons of original ideas to make the game quite unique.

AA2K7 is the latest version of a freeware online deathmatch game that was first introduced to the public in October, 2004. Since that initial release, nearly every aspect of the game has been revamped, in fact, much of the content and code from the November 2005 release of Alien Arena 2006 has been redone as well. It's like an entirely new game, and it may shock people just how much it has improved in less than a year's time. With 37 levels, five modes of play, six mutators, built-in bots, 10 player characters, 8 weapons(with alt-fire modes), the game has an endless supply of replayability. With so many new features, AA2K7 is nearly an entirely new game when held in comparison to it's predecessor. With the trials and tribulations of software development, endless hours of playing, gathering feedback, COR Entertainment has been able to not only fine tune and perfect it's flagship game, but add completely new dimensions to it.

Using the CRX engine, which is based on the Id GPL source code, AA2K7 now includes modern effects such as real time shadows, lensflares, light blooms, reflective water, textured particles, stainmaps, 32 bit color, shaders, fog, and much more. Built into the game is a easy to use server browser which allows the user to query information about each server. A Q3 style console has been added, as well as colored player names, winner podiums, and weapons stats. The best thing about the CRX engine however, is it's netcode and speed. Even on a modest system, you will get excellent framerates, and movement is still extremely smooth and fast, even on high ping servers.

Bot AI has been improved with each release, and for AA2K7, a number of improvements and enhancements have been made. These bots are among the most human acting bots in any game, period, and also some of the toughest if you choose them to be. They are fully configurable using an external editor, and skill levels can be set in game.

New for AA2K7 is Team Core Assualtl, a mode in which players must work together to disable their enemy team's central metal spider. Don't forget about the Team Deathmatch, Capture the Flag, Deathball, and All Out Assault mode(in which players can enter vehicles) either.

What are you waiting for? Find out why this is being called "The Ultimate Freeware Deathmatch Game"!

This game looks horrible. Stop posting every fricken' demo download ever. These games are horrible.