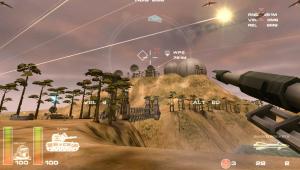 'Breed' is the first project to be developed utilizing the 'Mercury' engine. Breed is an action based game set both in Earth orbit and on its surface. From the orbiting USC Darwin the player launches attacks against the Breed, the aggressive biomechanical race infesting Earth. Once the Darwin is discovered the Breed will launch waves of attacks to destroy the last of the USC cruisers. The player takes control of 'grunts' who may be flying fighters or dropships, driving tanks or APC's, manning vehicular turrets or running around in the dirt, trying to blow away the 'Breed'. Heavily armed dropships are used to deploy ground forces into Breed controlled territory. If aboard a suitable vehicle, the player may move freely between orbit and the planet surface.

Earth's near future, advances in technology and space travel allow us to venture further out even beyond our solar system. In the year 2600 much of the planet's population have left our blue/green orb and formed colonies on the worlds of the Besalius 'binary' star system. All seemed peaceful in these fledgling colonies but as the last shuttle arrived in 2602 they were attacked by a terrifying alien race that would be nicknamed 'The Breed'. These attacks seemed to be random with little or no thought or logic, but they were devastating nevertheless. Under such an assault the colonies had no choice but to send out a distress call to Earth. In 2603 Earth had mobilised a great fleet of United Space Corps attack cruisers in answer, putting their very best and brightest at the helm. These ships now made a year-long trip to the Besalius system - hoping that they would not arrive too late.

Every cruiser is equipped with the latest technology and weapons. Stocked with a full compliment of ground assault vehicles and fighters. These ships are the tip of the iceberg sent from Earth into the void and carry inside their vast hulls an array of genetic gestation pods, capable of growing a constant supply of ground forces - known as GRUNTS (Genetically Revived UNiversal Tactical Sentient). Fiercely loyal, bred for combat and totally expendable these are the backbone of Earth's new breed of warriors and defenders.

After one year the fleet arrives at Besalius in 2604 and swiftly engages the Breed across the system. The battle is a long and hard one, the Breed are not going to give in without a fight and the aliens lack of intelligence is more than compensated for by their ferocious nature in battle. The Colony War takes its toll on Earth's resources as well and during the campaign they are stretched to breaking point. In 2624 the USC forces claimed victory in Besalius, but it was not without cost - the colonies had been devastated and the fleet badly damaged to a point that only the USC Darwin was capable of making the journey back to Earth. Captained by Saul Richter (A legend now with over two hundred victories against the Breed under his belt) war weary and battle scarred, the ship and remaining crew begin the journey back.

It was in 2625 that the veterans of Besalius finally returned to their home system to find that instead of a hero's welcome, something else was waiting. The Breed had outflanked them and in a swift move eliminated any human opposition; they were now in complete control of Earth. The colonies were nothing more than a diversionary tactic - a plan to pull the bulk of the planet's defence forces away, leaving it ripe for invasion. The population had been enslaved or devastated, the survivors had been forced into labour camps and made to construct the Breed's machines and installations.

But humankind was not quite ready to go into the darkness just yet; the USC Darwin was moved into orbit around the Earth and remained there under a cloaking system. Saul's plan was to make key 'surgical strikes' upon the Breed's incomplete infrastructure, supporting the reported pockets of resistance fighters who waged their own guerrilla war under the leadership of the charismatic Carla Alvarez. Between the hidden attack ship and her crew and Carla's forces the Captain hoped that they could turn the tide back in favour of the human race…

loved the game kinda like halo but not. Know what i mean?

poo your an idiotseems fine to me

you mean the game or my wee wee?

man what a morondid you even try this gameit rocksthe way you can switch between all 4 soldier :) its niceweapons are coolloved itpoo your an idiot

forgot to say my nameand btw...:Dpoo your an idot

its you're not your

fileplanet sucks. u either pay $70 for a year or get used to millions of hours of waiting for games and popups...try a site that DOESN'T suckF_U_C_K YOU ALL!

yellow poo has befouled the name of the real poo. don't listen to him.may he burn in hell.

fileplanet sucks ***!i would rather download @ 45k then wait in the stupid *** lines!

lots of ai bugs and tweack to do but hey its a beta... worth the try dohwith a good storyline and multiplayers this game will rockit as great potential unlike yellow poo whos an idiot :)

I've read about being able to fly the dropship, but I can't get it to work. Does anyone know of a site in which I can download a script for that?

yes, theoretically the demo IS downloadable, unless you use something other than fileplanet, THEN it becomes practical

You can download the game without paying any monthly fees atftp://ftp.fragland.net/demos/breeddemo.exeIf I wanted to pay for it, I'd buy for the **** game!!!This site is free, but even using a 'download accelerator' I'm only getting 54 Kbsec.Still.... YOU SHOULDN'T HAVE TO PAY FOR DEMOS!!!!P.S. Both poos are idiots.

HA! i got u guys sooooo good.f**k yea

i downloaded off of ftp://ftp.fragland.net/demos/breeddemo.exe and got a speed of 150k/sec, can't wait to try this game looks awsome!

Why even mess with fileplanet?3D Gamers is much better when it comes to downloads.No account necessaryDownloads are freeNo waiting in lineGood connection speed-usually between 150K & 250K (gotta love broadband).

3dgamer is great so is pcgameworld.com anyways the game kinda sucks anyways. I give it a 6.5. graphics are ok. gameplay is ok. its just not fun or exciting. special effects suck too

well maybe not nuf said! im surprised it ran so well on my system cos i had heard sum ridiculous specs from magazines to get it at highest detail!I hated halo yet i think this is similar however i feel this game is much better!There are a few gltiched like ur grunts egttin stuck in scenery but a very very good game that needs a wee spit shine and we could have somethin special!

Screw fileplanet. the fragland place is WAYY bettah. have u ever had a speed of over 200Kb/s on fileplanet?? don't thyink SOOO

Well, Terrain and the "breed" modeling is very nicely done. the human modeling could use some work things like the faces and height do not seem right. The voice-overs are really crappy. And the AI isnt the best either. Looks like it should be a Multiplayer game than single. The whole idea behind the storyline is kinda knock off of other games, not original. not much else to say. Needs a bit more work glad its not a finished product yet.

Great demo but seince I'm a cheater on SP games like this,what are the cheats to it cuz I'm tired of dying

I want to play

**** all u do is flaming at eachother (not all), the screenshots look nice, but im not very fond of siencefiction...i think its worth a try (ow and dont make any remarks on my english, becouse its not my native tongue thnx)

1-FilePlanet rox when you have subscription2-FilePlanet Suck when you dont have it : WTF a no-game name all "no-sub" server full !! Yeah right....<=== Need some folks to put them in a court for "FAKE" User in.

Would love to play the demo, but the coding sucks and won't allow me to install to my default drive G: (don't ask!!)Any body know a way around this, the problem is writing the breed.cfg file at the end......Cheers.

the games is ok...nothing impressive. Kinda lacking in the inginuity department. And I don't like having to switch around to different characters. I give it a 7.0

ur game is fantastic

You're all f**king retarded. Also this game owns your face.

Nice game shows potential.My only issue is that while in game it reboots my puter and that blows!but since it's a beta who's complaining... :-)

I can't play the **** 'cause my computer reboots after i saw the intro.