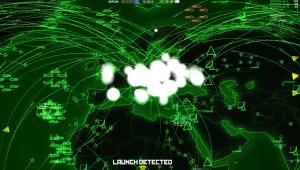 Introversion Software presents its third title, DEFCON, a stunning online multiplayer simulation of global thermonuclear war.
You play the role of a military Commander hidden deep within an Underground bunker. Your mission - to successfully exterminate your enemy's civilian population whilst disabling their ability to attack your own. Start by launching your battleships, subs and bombers in order to decimate your opponent's defences. Scramble together your alliances but remember only one can stand victorious.

Prepare your pre-emptive strike before one of your supposed allies gets the same idea. Choose the perfect moment for betrayal, obliterating your opponents with an apocalyptic thermonuclear barrage, but get it wrong and their devastating counter attack will bring you to your knees!

It's Global Thermonuclear War, and nobody wins. But maybe - just maybe - you can lose the least.

Defcon will be available for download via Steam, for $14.95.

First!Let's play some global thermonuclear war!Looks like it could be fun.

This has to be one of the more boring games invented. Things take forever to get done, while you have to listen to the same no-content music loop.Little choice of actions, very slow pace (even with speed at maximum), very boring.

It's called a RTS lol, if you haven't noticed it's not supposed to be a mindless f**king run-n-gun like stupid gamers (You!) are used to.

@Anonymouse 0:0Dont cry because people don't want to waste their money on a video game. Buy it yourself if your so interested.

No sh*t, I know what an RTS is - C&C is an RTS, you get some adrenaline from it. Settlers 2 is more of an RTS than this is, this is just tooooooo **** slow-paced!

-,- arent rts games supposed to have aload of options, this just has 2 boats 1 sub, 1 nuke silo, 2 kinds of planes, 1 kind of radar building, etc...dude other rts games have so much more... its not to bad off a game but more stuff would be nice and besides putting in a super mega slow game speed put in pause instead.

This game is more like real time chess.You don't have that much options, thus the game is much more balanced, everyone starts with the same setup. And at least there isn't any resource gathering. I say this game kicks C&C's ****.

are you all def? or just convicts, you bunch of hicks!

this is another game created by free game making software you can download.

only i will know so i cant tell. but i have did some research, and sure enough it game back with free gamemaker written all over it.but i am not at liberty to disclose the website sorry.

Yeah, It doesn't use Gamemaker.A look at the basic executable structure reveals it uses a modified Uplink engine base.AKA you are maknig s**t up to sound smart, but are really a retarted, low-level 10 year old.

iam trying to tell you ive done the research and spoken to many of the people who design and get the games ready to go gold, and they all agree this is a homemade game, if there ever was one out there, and we have all studied the simplicity of the game and we all came to the same conclusion,this is propably made in under 3 days at about a cost of 35 dollars.but you do not have to take my word for it,and you can call me names if you want but that dose not change the facts..

So you ARE talking total s**t!For the love of god, stop trying to sound smart by talking about something you have no idea about, it just makes you look like an idiot in front of the people who do know what they're talking about.

so then would you be willing to pay shipping and handling costs,? if i got all of the normanclayture and the sum of the test results with the subtitles, to go along with the studies i have conducted,with the exact step, by, step, procedures that went along with confirmation and sent these to you.to look at on your own?

PC Science? WTF are you, 3? I'm a professional programmer, I do this sort of thing as my job daily!I don't think spreading slander is protecting gamers, do you?Me unwilling to give you money for no reason makes me ignorant? Wow, you are a d**kface.

your use of words tells me you are a professional chicken choker, who works as a farm hand, or a monkey spanker part time for a zoo, but a pc pro? i doubt very much pc programers make enough money to put it where it counts such as shipping and handling for something that might teach you that, you knowing yourself does not know what hes typeing about, but i do not blame you cause it is bad to be shown the door.in your case the backdoor trots.

Uhuh... "Professional Chocken Choker"? "Pc Pro"? Wow, You are a ******.And all just bacuase I proved you wrong and didn't want to give-in to your money-making scam, that of a three year old.Nice job copying what I said before but using petty language!

the only thing you can program is your p***s pump, and your not even a judge.

Right... Well, post the bank details if you really have rela proof that it was made in free software. Better yet, digitize it and upload it to you Reputable FTP site.

i will quit posting here when you kissit, and stop scratching your flopper, in public and by the way, how is your 1 brain cell doing dumbass?

yea, and when did you have your last hiv test? go get tested, and quit trying to tell people smarter than you to quit posting, dumbass!