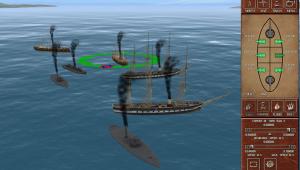 This game will include elements of various genres - historical wargame, naval simulation and turn-based tactical strategy.

The game's flow of time is organized into rounds. Within the limits of each round, the player and the computer opponent take turns executing all actions possible within five minutes of real time combat for each of their ships. At the moment when the the selected active ship is carrying out an action, all other game units are motionless. Time for decision-making is not limited.

Game locations are presented in real 1:1 scale and are not divided into cells or hexagons. The trajectory of movement of the active ship is determined by laws of physics and calculated using realistic speed, size and shape of a unit.
Immersion in the game world is created by means of two key features: historical accuracy in the presentation of events, and realism in simulating combat.

Historical accuracy:
The game's locations are created based on historical maps and other surviving documents and accounts of real battles;
3D models of the ships are based on original drawings and designs from archives, or those restored by experts using photos, models and descriptions of the ships that participated in the Civil War;
reconstruction of real formations, maneuvers and combat methods used by ships on the basis of naval doctrines and accounts of real battles between armored squadrons of steamships and other vessels of the mid-19th century.

Realness:
use of real specifications: the size, hull contours, displacement, construction materials and design, quality and arrangement the crew and armament, speed and acceleration;
calculations of physical interactions such as collisions between ships, flooding and capsizing, shell modeling, ammunition fires and flooding;
use of a special ballistic calculator on the basis of original artillery tables for definition of accuracy, penetration ability, explosion and shrapnel damage;
the morale, training, physical conditions of the crew have an influence on the efficiency of the ships;
fulfilling certain conditions is obligatory for successful completion of a mission and transition to the following one, and also influences events which will take place within single missions - as a result of which the game creates the illusion of a true dynamic war in which the player can win, lose or draw.
While the campaign currently under construction will conform to the real course of the Civil War if the player follows a historical path, it will also be possible to play missions based on alternate outcomes of events which assume a more favourable position for the Confederation in the first two years of the conflict, including diplomatic recognition and construction of a stronger, more balanced Southern fleet in European shipyards. In the campaign, the composition and condition of your fleet will be determined by real economic factors faced by the opposing sides. Diplomatic relations with other states will determine whether the Confederation can receive new ships it had ordered and paid for, but never received.

The primary goals for missions will include conducting and lifting blockades, commerce raiding on the high seas, suppression of coastal batteries, and fleet battles featuring everything from gunboats and sloops to cruisers and ironclads.

i live in Canada