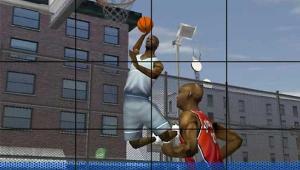 The games features include:

-Online Community
Enhanced Chat & Match-up with the fast, easy-to-use Match-up System. Enter the online Lobby to set up a game, chat with friends, and more.

-New Player Interactions
See player personalities and emotions come out on the sidelines and in game: Players argue calls, celebrate a key basket, encourage their teammates, and more.

-Complete Control in the low post.
Back a defender down and then select from a number of different post moves such as an up and under, jump hook, and turn around and fade away jump shots. Feel the contact and battle for position, then finish off your defender with two the easy way.

-Legendary Players
Take on Michael Jordan and other legends of the NBA 1-on-1 or 5-on-5.

Various language versions of the demo have been released. Except for the English,German and Spanish offered for download here you can also get the French and Hebrew versions from EA's ftp.

would you send me this demo for free for playstation please

this nba game makes me to be a player

this game is cool

I wont to play this game

I live in turkey. so I speak english very little.Please you send I:). [nba live 2001 crack]

this game is cool

i want to play

I have played it once and it is superb.I now want it very badly.

Can I get it for free

it is very goog game my frends like it very much

the game is very nice

i havent played it yet but yall seen the commercials this game is phat. best live if seen

Nba Live 2001 is a good game but when playing in the superstar level the AI tends to cause a lot of turnovers and impossible rebounds in order to catch up.

i need the crack because i cant play this game

this games IT'S THE BEST GAME