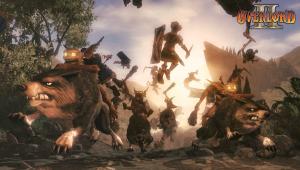 In the Overlord II demo, players step into the big spiky boots of a new Overlord whose sights are firmly set on becoming the king of chaos, the bringer of evil and the master of Minions. As the demo opens the Overlord, aided and abetted by a team of brown fighter Minions, emerges from his underground lair into the ice caves only to discover a Yeti frozen in a block of ice.

The Minions can, in their inimitably violent way, 'defrost' him and then give chase as he knuckles out into the snowy wastes of the Hunting Grounds, near the town of Nordberg. A playable demo for the PS3 version of the game is available as well, via PlayStation Network - the Xbox 360 demo was released last week.

Its awesome.Im buying this one..

To bad this is released one day after my birthday, if not I would get it on my bed.Really awsome game, like an enhanced version of the first game.