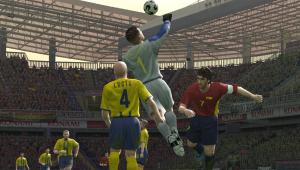 English Licenses will be included for the first time ever. But don't get too excited, only Arsenal and Chelsea are going to be licensed. Other new licenses include those for Rangers, Dynamo Kiev, Galatasaray and FC Porto. 2005/06 kits will be added for the clubs from La Liga and the Dutch Eredivisie. Real numbers and lettering is included for the licensed teams. Updated kits have been added for the unlicensed clubs.

Although the game uses the same engine as in Pro Evolution Soccer 4, there are various enhancements. Players will now be seen to have their shirts untucked, and can also have tape on their fingers (generally used to cover rings). Wristbands are also now included in multiple colours and players can wear cycling shorts underneath the club shorts. Players will now also move better around the pitch thanks to even more animations.

A new weather condition has been added, snow. Now you can play in even the coldest conditions, and even see breath coming from players mouths. Also to do with the pitch, you can now play with new balls, including an orange ball for the snow conditions. More ad boards can be seen around the sides of the pitch. Previously only 3 different styles were repeated whereas now there are many more styles.

- Improved online play. Konami have promised less noticeable lag. In addition you can now compete your Master League teams against each other.
- Improved Master League with more control of player growth.
- Two new positions: Wing Back (For players like Cafu who go forward a lot but are defenders) and Second Top (For players like Scholes who play generally just behind the strikers).

Anyone tried this yet? im guessing it's probably quite good.

Football sucks! It's a drug.

Good demo.And obviously makes you say "I WANT MORE!" which you won't get until October so if you love football, avoid this demo and but the full game in October {UK}

hooray the best football game getting better, fifa can f off

can you play full time half length in this game?

i need action games with real graphics and downloadable

Mowgli u must be using drugs or something worse crack smoker.

What's the release date of the game?

if you want to play for 30 minutes..u can get the trainer from soccergaming

how many teams from each championship will it have? any new teams?

can you believe this? all these so called macho men running around in tight shorts kicking a ball. all it amounts to is the fact they are trying to show there rumps to each other for you know what!!

as pat robertson would say i wholeheartedly agree.

besides the guy in the yellow jersey has his eyes on a slong and not the ball!!

any responses? we are not getting enough responses, to keep this site open, yours truely megagames manager..