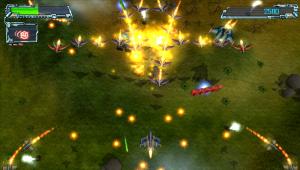 "Space Strike" is an action-heavy "shoot-em-all" space arcade that challenges players to destroy the onslaught of aliens before they wreak havoc on humankind. The game takes players to the year of 2307. It is 50 years since the humans learned to enhance the environment of planets and 15 years since they have started to colonize the Moon. A few hours ago the radars detected a hostile presence within an unexplored area. This is where you step in.

Assuming the role of a spaceship pilot, you must unleash the fury of an awesome high-tech arsenal that includes impulse guns, quantum lasers, heat-seeking missiles, and much more in order to survive and blast away at alien invaders. You must destroy the alien spacecrafts, tanks, ground facilities and avoid enemy fire by maneuvering out of sticky situations.

As usual, you begin the game weak and ill-equipped, but over time collect high-tech weaponry and upgrades. While taking on 20 challenging missions across 5 environments, you'll face many alien types. They range from alien fighter jets to flying insect-like vehicles to ground artillery, tanks and two super powerful bosses. And this is just a taste of what's to come as you explore the game!

The combat action is intense, and you won't even have time to pay attention to the visuals, but "Space Strike" is one gorgeous game, from the laser shoot-outs and explosions when another alien fighter is down to the stunning special effects when battling giant bosses.

The game features Divo Rating system that allows players to share high scores all over the world.

I know bout 1290 games that are almos exactly the same.

I've got some problem with colors. The screen turns almosr blue.