Thrillville: Off the Rails Demo 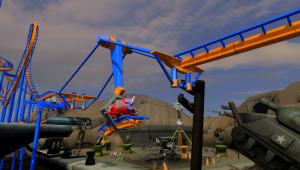 Thrillville™: Off the Rails™ amps up the family-friendly mix of gameplay that made Thrillville the best-selling original children's intellectual property of 2006 with some of the most outlandish roller-coaster concepts ever imagined, as well as new ways to talk to park guests and a new array of carnival games.

Off the Rails lives up to its name with 20 death-defying rides so outrageous, they inspire the same word from every park visitor who sees them: "WHOA!" Players build these incredible "WHOA Coasters" to leap from one track to another, launch through the air like cannonballs, blast through a burning rings of fire and more.

A new lighthearted story ties together more than 100 missions, complete with 34 playable multiplayer theme-park games and social interaction with park guests that's better than ever. The in-depth conversations both advance the plot and suggest better ways to manage the park. But is every guest to be trusted?...

- Experience the visceral fun of interacting with a theme park you create.

- Build and ride your own creations, talk and joke with all your guests, and play dozens of minigames.

- Use the Wii Remote and Nintendo DS stylus in innovative ways to develop roller coasters and play minigames with the flick of your wrist.

- Create 20 death-defying WHOA Coasters such as these:
o Hotrod Stunt: A nitro boost propels a car across a broken track.
o Pendulizer: A giant arm grabs the car just before a gap in the track, whips it around in a full circle, then sets it down on the other side.
o Escape Drop: The track holds the car stationary as it lifts itself from level ground to a full 90-degree drop. Then it lets go.

- Distinguish your rides even more with enhanced customization options. Attach animatronics, flowers and flaming hoops to all of your coasters and rides.

- Conversation more directly impacts the story than in the original Thrillville.

- DC Studios is creating the entirely unique Nintendo DS version from the ground up to best take advantage of the handheld's touch-screen capabilities. 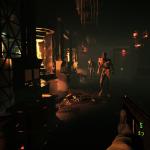