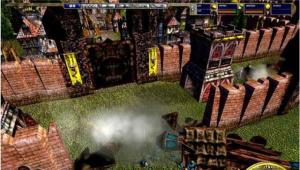 Chaos and war reign in a world of knights and demons. You are tasked with restoring the power of a kingdom to its former glory using innate cunning, military might and a fearsome will to win. Now it is time for the Warrior Kings to come to the fore.

Warrior Kings™ is an epic real-time strategy game that smashes the mould. Using true 3D it propels you into a living, breathing and fascinating medieval fantasy world, a world for you to master, a world for you to grasp and seize control. Now it's all in your hands!

Build up your economic and military power base, research new technologies, and employ spies, mercenaries, priests and merchants to enhance your strength.

Use real military formations and tactics to conquer on the battlefield: perform flanking manoeuvres, take control of the high ground, ambush and destroy massive formations using pikemen, archers and cavalry!

Master the skills of siege warfare and watch in stunning 'zoom-able' 3D as your troops swarm over castle walls to sack mighty cities.

Follow the game path that suits your skills: the church with her crusading knights; the pagan gods with their destructive demons, or the renaissance scientists with their advanced technology.

Conduct a massive campaign through 22 extraordinary levels made up of over 80 unique quests. Can you grab power where many others have failed? Resurrect a once mighty empire and make yourself lord of all you survey. Seize power, and become a mighty Warrior King!

I really want to play this game.

it is bad game

Not recommended. it's a 250mb download for an Age of Empires clone that doesn't work that well.

What are you all talking about?!? This is one of the best games that I have ever played! The demo is worth every last megabyte! The game is like Black & White and Age of Empires combined. THIS GAME IS AWESOME!!!

Give me Warior Kings demo.Please.

give me warior kings demo.please

Please give me a warior kings demo!

This Game it looks good.if it has Rpg moments inside i will try the demo.Elven blood Rulezzzz