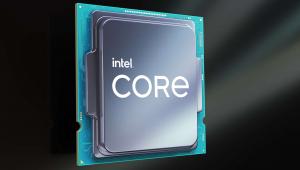 We’re always looking for great new components for budget PC builds, and that’s exactly what Intel has delivered with the new Core i5-13400F, revealed at CES 2023. For just $196, prospective buyers will get a 10-core processor with 16 threads, and a sizable upgrade over the last generation’s Core i5-12400F.

Those 10 cores comprise two different types of core: Six Performance cores (P-cores), and four Efficient core (E-cores). This type of setup will be familiar to those who’ve looked into any number of different cores over the last few years, and it’s aimed at making sure the power of the P-cores goes to the right places. The more powerful P-cores top out at 4.6Ghz Max Turbo, a big 0.2GHz upgrade over the Core i5-12400F. As you might expect, those six P-cores will be cores that handle your games and more demanding programs.

So, what about the four E-cores? Those top out at 3.30GHz, and so are meant for handling much lower demand tasks, taking the strain off your high-performance P-cores. It’s a good setup, and one we’re excited to see come to the Core i5-13400F, as the i5-12400F didn't have any equivalent of the E-cores.

While the i5-13400F isn’t going to be the match of the higher value chips, like the Core i9-13900K’s monstrous 5.8GHz Max Turbo speeds, it’s definitely going to be a strong choice if you’re building a PC with a more reasonable budget. Frankly, it’s a pretty good upgrade over the last generation of chip, which isn’t always something we can say about hardware upgrades. With the RRP being under $200, it’s also fantastic value, and a chip we’re sure will be in high demand.

Keep in mind the “F” in the name means this chip doesn’t come with the Intel UHD Graphics 730 chip, and if you want the same chip with integrated graphics, you’ll need to go for the Core i5-13400 instead. It’s a little more expensive, with an RRP of $221, but just as unlikely to break the bank as much as its F-laden cousin.

This isn’t going to be the last chip news from CES 2023, of course. AMD has a keynote tomorrow, and we’re fully expecting to see more releases there too.