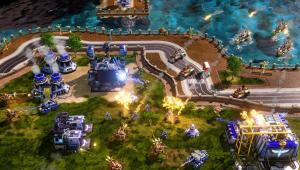 • The IFV base defense is now more vulnerable to cannon damage.

• If a King Oni uses his bull rush secondary ability while shrunk by a
Cryocopter's S.H.R.I.N.K. ray, the King Oni will now explode on impact.

• In multiplayer matches, Allied and Soviet players may now dock their aircraft
at any friendly airfield, regardless of faction, to refuel and reload.

• Added the ability for hosts to select a random tournament map when playing in
a custom match with 2 or 4 players. Players will see the Random Map option on
the Map Selection list.

• Added a community news window that is displayed on game launch. This window
can be disabled by selecting "Do Not Show Again" on the news window.

• Units will no longer occasionally animate incorrectly when crossing a
bridge.

• The Striker VX and King Oni now correctly animate when powered down by an EMP
attack.

• Fixed an exploit that allowed players to create health, money, or veterancy
crates.

• Fixed a crash caused by saving while a Magnetic Singularity was active on the
map.

• Added additional Mod support to Red Alert 3. <-- this is in preparation for
our official Mod SDK release. We are currently working on polishing the SDK, I
will inform you with specifics when I have them regarding the release.