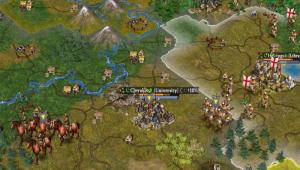 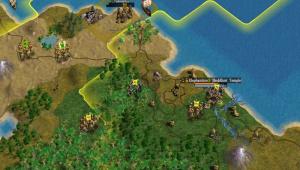 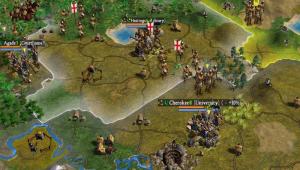 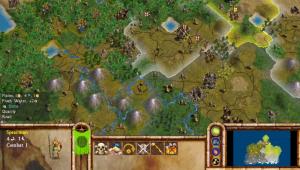 2005 will witness the release of Sid Meier's Civilization IV, the latest and coolest installment in the greatest strategy game series of all time. Civilization IV features breathtaking 3D graphics, cool reward movies, brilliant audio and music, and, most importantly, the best and most addictive gameplay of any strategy game ever created. As a matter of fact, Time magazine has named Civ IV one of the hottest new games this year!

A game of remarkable depth, Civilization IV spans the entirety of human history, from the stone age to the space age. At the start you choose the nation you want to lead. At first, your people are primitive stone-age villagersand its your job to guide their development and research technologies to drive their advancement. They begin by discovering more primitive technologies such as sailing, archery, mysticism, and mining; eventually - if they survive - you will lead your people to the modern era and beyond, becoming the greatest ruler in history.

During the game, you will meet other growing civilizations - the United States, Mongolia, Persia, China, India, France - there are 18, each ruled by famous historical figures. Each civilization has its own special military units and strategies - some are fairly peaceful, while others are expansionists and conquerors. You will battle your foes with a huge arsenal of weapons, beginning with primitive archers and warriors, then catapults, knights and frigates, and eventually with modern tanks, submarines, mobile infantry, helicopter gunships, stealth bombers, and nuclear weapons. However, Civilization IV is more than just a great combat game: you can achieve victory through global conquest, diplomatic cunning, cultural or religious alliances, and technological dominance.

Sid Meier's Civilization IV offersthe most fun, addictive and visually exciting Civ experience ever. In addition to faster mid- and late-game AI turns, as well as vastly improved graphics and audio, Civilization IV offers greater control over your civilization's government and religions, while at the same time de-emphasizing the less fun portions of the earlier games (cleaning up pollution, for example). Further, Civilization IV has been designed from the ground-up to deliver fantastic multiplayer gaming options, as well as easy modding - allowing you to create new units, game maps, scenarios, and even entire new civilizations!

Sid Meier's Civilization IV is scheduled for release in winter of 2005. Check this space often for further updates.

The Civ series games are SO **** good

Yepp they are :D

I agree, when's this due out?

Nevermind. I missed it at the end of the article.

Is there anything Sid Meier cant do right?

The casualty rate on this one is gonna be high. I've read all sorts of stories about how Civ 1 beta failed to find any bugs first time round as the beta testers decided to report the bugs after "one more turn" and never did.Civ 2 actually managed to cause severe health problems across teh world and a few people lost their jobs as the addiction set in, same story with Civ 3, Civ 4 is gonna even more powerful, perhaps we'll see our first gaming related death.Civ for the win!

It'd hardly be the first gaming related death...But yeah, this looks awesome.Ain't it funny how all the idiots love to comment on "Xbox360 spotted in wild" but when it comes to a complex, intelligent game like Civ very few people seem to take interest... sigh

Quote Murton "Civ 4 is gonna even more powerful, perhaps we'll see our first gaming related death."There have already been several games related deaths in the far east by people that have gone on playing games for 24+ hours!!!

"but when it comes to a complex, intelligent game like Civ very few people seem to take interest... sigh"So true... :D

The Civ. games are fun...But where's the 'breath-taking 3D graphics' the article mentioned?

Perhaps I should have said first deah in the western world. I stand corrected.Either way, time for us all to start savings accounts in case we succ*mb once again to "after one more turn" syndrme and lose our jobs for not showing up.

the only complaint i have about 1 of sid's civ type games is that Alpha centuri had Ai which was too easy, not difficult enough. Other then that sid pwn all.

I played all the Civ games, they I loved them all ! cant wait for Civ 4 !

"perhaps we'll see our first gaming related death."There is a huge problem in Asia with game related deaths, you're crazy.