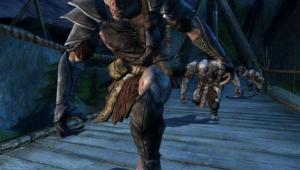 A series of new audio interviews with Jeffrey Steefel, the Executive Producer for The Lord of the Rings Online: Shadows of Angmar, is being released online, Codemasters announced.

The audio clips will be released over the next three weeks and MegaGames will make sure you get a taste of what is to come.

Through the series, Jeffrey Steefel discusses all-new game information, including the conjunction and morale systems, planned expansions, and the famous characters you'll encounter in your adventures.

Recorded by Sam Satine Russell, Community Liaison Manager for Codemasters Online Gaming, the first clip is now available and details the areas of Middle-earth that will be playable at launch. Brand new audio clips will then be released on Mondays, Wednesdays and Fridays over the course of the next 3 weeks.

To listen to the interview and for a chance to join the beta testing program for The Lord of the Rings Online: Shadows of Angmar follow the download tab above.

OMG took a minute off to post here and went back to his LOTR game.. Omg im ur fan, your the best ( im kidding ofcource)

Lol u guys aint interested in the game at all?