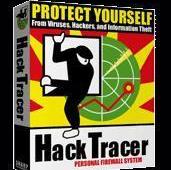 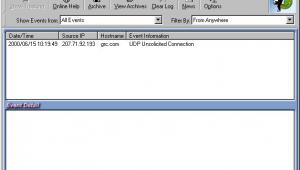 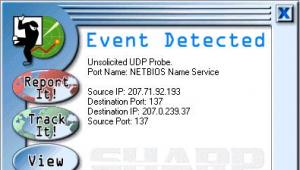 HackTracer is the first-of-its-kind intrusion detection application that "tracks the hacker"! Designed to reside on a stand-alone home or office PC, HackTracer works in the background, keeping a constant watch for attempts to "hack" into your system.
Upon detecting a hack attempt, HackTracer:
Denies access to the intruder and begins tracing the hacker back to their point of origin.
Brings up a world map to display the tracing route.
Creates a log-including the IP address of the intruder-using HackTracer Technology that may be used by authorities.
After HackTracer is installed your computer is effectively 'stealthed'. Any attempts at pinging or portscanning will receive no response. Unsolicted UDP packets will not get through; unsolicited TCP connections will receive no response. The computer cannot be detected from outside. Email, web browsing, streaming media, ICQ and so on will still work normally.
Due to the architecture this first version of HackTracerTM will only operate on Windows 95 based architectures; This includes Win95, 95A, 98, 98SE.
HackTracer will not work on NT and 2000 at this time, we are currently working on a Windows 2000 version for release later this year.

uuuh, is this any good?

Why not just get the free firewall at zonelabs.com? I checked through all the features listed above and the free firewall does them all as well. Another program aimed at mom and pop who want to protect their shiny PC against the gang of terrifying hackers queuing up to trash it? Har har, beware of anything that has too many exclamations in the blurb, ie: tracks hackers! that want to hack you! logs IP addresses! !!!!!!!Sell software by scaring people....

This is a very good program, Anonymous!!!

i would have to agree with Lykan in this issue. Everyone who doesnt know what is going has either downloaded this or is currently. so enjoy

I totally agree with Lykan, give us a break people....

Well, I've currently got BlackICE andhave tried ZoneLabs.com's firewallZoneAlarm - It's okay to a certaindegree, when it was easily taken out bya simple ICMP attack. BlackICE is good,but this program I have yet to try.And if you want to talk about sellingsoftware by scaring people - Take abig ****ing look at Anti-Virus Software,Lykan! Jeez - They live on fear ofviruses!!! But, I'll try this one.It still does the same stuff that otherIDS tools do - 'stealth' your PC's portsand ignore certain data such asportscans and ICMP echos, etc etc.The only reason why I use IDS tools isthat I run Windoze - that's pretty muchINSECURE without help from IDS software.And i'm looking for a better one thanBlackICE - It's reporting functions onattacks and suspicous activity is ****,no tracing, just a reverse lookup on theIP. Mind you, the press release sayingthat the software is first-of-its-kindis full of ****... what more do u expectfrom press releases...

Who cares, who scares ! all is for fun, or ? ;-)Without money this is enough...Just wait for the crack, or make your own and that is all...

This program sure sounds good. Only the part where it says the programs still work normally. W/ Zonealarm I have troubles connecting to AOL, or keeping the connection alive.

well this is a good prog that's right, but kind off paranoid if you have too or moore computer in your system you'll get messages like "this machine tried to enter your system", little bit boring . . .

OK, admitted I was harsh on the press release, but I really hate it when companies talk bullshit to people in order to sell their product. And mdk, yes you are right, anti-viral software sells pretty much on fear alone :)Just try and get the real story from someone in the hacking community before spending money on software like this....

never judge a book by it's cover people

Well, I can never be bothered to buy this stuff - just get a crack, or make it.Just like BadDoles said. Lykan - I understand wat u mean when companies start talking bullshit,pplz try before you buy! But ZoneAlarm was a pain in the ****, didnt let me run ICQ properly.I dont really have much else to say - someone else say something...

This software is a pile. I think there just trying to get you to buy another useless piece of software. Want real security? Get a router like what linksys has out. It basically stops a lot of crap from even touching your pc.

i hav not got much knoledge in the field but i know computers, i tried zonelabs program but it was ****, so this one seemed beta cos it traces ur enemy!!!!

Hoi, My name is Rene,I'm 12 and I'm immitating a chicken.

Love the site, and this program looks like it would be a lot of fun to just screw with peoples heads