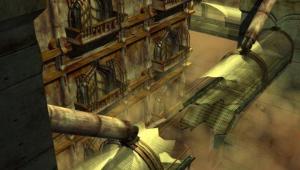 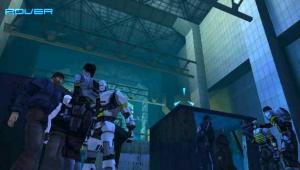 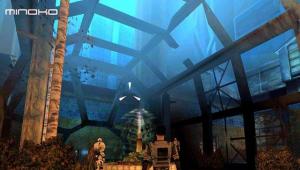 Due to severe overpopulation, the planet Earth's diameter is increasing with the growth of towering mega-cities, each inhabited by millions of humans. Buildings are growing ever-upwards, interconnected with a thick web of roads, walkways and service channels. In these giant human hives, only the affluent may feel the rays of the sun and breathe the cleaner air.

Descending thousands of feet through the echelons, conditions steadily decline to slum level. The inhabitants of these squalid areas barely glimpse the murky sunlight that filters through the dense infrastructure above. And below the slums lie even more repugnant conditions… an underworld occupied by criminals, cultists, the wretched and deranged. Assumed derelict, the very lowest of these areas is visited only by structural engineering teams when foundations require strengthening - in order to accommodate yet further elevations.

It is within one such city that Project Eden is set. The player(s) controls a team of 4 members of the UPA (Urban Protection Agency) - an elite force which deals with serious disturbances within the city. The team is initially called in to investigate problems at the 'Real Meat' factory, in which all the equipment has started to simultaneously malfunction. Technicians sent to repair the machinery have gone missing without explanation… Here begins The UPA's sinister trail of inquiry…

Designed by the team that created the original Tomb Raider, Project Eden strikes into the action-adventure genre with a radical combination of action and adventure featuring interchangeable 1st and 3rd person viewpoints.

With control over a team of four characters, gameplay relies heavily on character interaction and is either single player (co-operative) or four player (network). Command may also be switched from characters to remotely operated equipment. The 1st person viewpoint allows the character to see torso and feet as well as the realtime shadow.

Driven by all-new engines, Project Eden incorporates the latest advances in mapping technologies, character skinning, animation (including variable speed playback), morphing and other dedicated effects. Gameplay is structured via a commanding script that leads the player through a world distorted by its own evolution, where the inhabitants reflect an unnatural and often sinister vigilance.