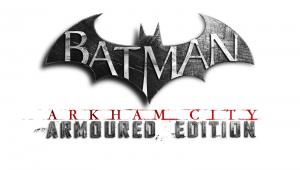 There are alternate Skins in Arkham City, allowing players to change the looks of Batman and Robin.

Comes with the Collector's Edition of Arkham City

Buy a Copy of Green Lantern on Blu-ray from Best Buy.

New Game +
Complete Batman: Arkham City on Normal or Hard difficulty to unlock New Game + Mode where you will retain all of your gadgets and XP. Several things are different in the New Game +:

No counter icons on thugs.
Different Thug Levels: Tougher thugs are available from the start of the game.
Different Thug Configuration.
Increased Difficulty Bosses: Bosses will be even more cunning.

Star Wars Reference (Lightsaber):
If you look closely in one of Deadshot's storage closets, you'll see that he has a lightsaber (an apparent reference to the fact that Mark Hamill, the voice actor for the Joker, also voiced Luke Skywalker in the original Star Wars trilogy).