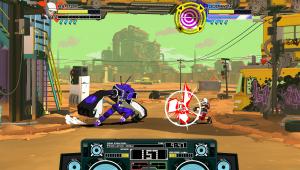 Sonata:
Zoot Suit (Sonata 1st variant of the different model)
Unlocked after completing the Grid/Sonata mission “Getting Up”.

Latch:
L.2 Full Mecha
Clear Green 1: The Offer of Story Mode with unknown specifics.
Note: It is not clearing without losing a stock.

Dice:
Domino The Cursed (Dice 1st variant of the different model)
Unlocked by going to Dice in a character select screen for any standard mode
and cycling through the skins you have unlocked for him very fast. Just mash your
mouse or button on controller and he will be unlocked.

Grappling Hook:
When you use Nitro’s special, if you hold down the swing button, Nitro will pull
himself to the ball instead of pulling the ball to himself.

Bunt out of special:
During Nitro’s special, when he reaches the ball, you can press bunt and it will
bunt the ball instead of hitting it.

Beginner's Guide:
This game is a high speed ball game that is sort of like dodgeball but is 2.5 dimensions.
The ball can go up to a speed of one million, however, it is pretty hard to get to in regular
matches. Also, there are many different game modes and characters to choose form which allows
players to find their own playstyle.

What is New from the Previous Title?
This new installment in the franchise brings a new flair to the game as it introduces several
new characters, new stages, amazing new music tracks, a story mode, improved AI, a new artstyle,
new mechanics, and the long awaited servers for multiplayer (albeit, they aren't the best).
Also instead of being just one hit kills, you now have a lifebar that will go down based on how
fast the ball is going. This was implemented in order for players not instantaneously die the
first few seconds of the match. Another thing is that you can now hit the ball straight down
and there is a mini yellow goal that sometimes appears during the match at the top of the map.
This is like a powerup that is activated by getting the ball into it and has several different
abilities (invisible ball, instant fast ball, ball telekenisis, etc...) that will last for a
while.

Lets Go a Bit More in Depth:
I have only been (currently as of the review) playing for three hours but I have a (at least)
basic understanding of what the game has changed. For starters, there are three new characters:
Grid, Nitro, and Jet. Of course, each has their own unique abilities and now everyone has a
double jump. Furthermore, there are a ton of new outfits and alternate costumes to choose from
for every character. (Although there are some secret outfits which I have not figured out how
to get.) Each character starts with four outfits already unlocked but in order to get new ones,
you have to spend in game currency (I do not know its actual name) which you only get from
playing the game (no microtransactions). There is also a story mode which is fairly decent
and provides a lot of lore which (mostly) explains the Leathal League universe. Also, you
unlock some alternate outfits from completing it and you get some achievements.

The New Characters
Grid:
Although he is quite a slow character, his main ability is to teleport in the direction you
are holding and launch the ball from there.

Jet:
My personal favorite, Jet is a fast character who mainly uses her kicks to hit the ball. Her
main ability is to put the ball in a bubble that cannot be hit (although the ball can be
grabbed out of it) which after a few seconds, will pop and the ball will go flying at a high
speed. She also has a jetpack that will allow her to hover in the air for a little.

Nitro:
Nitro is an average character who mainly uses a gigantic handcuff. It acts like a grappling
hook as it throws the ball away from the character, grapples it back in, and then throws it
again (sort of like a trick throw). He is a overall good character.

Some New Mechanics:
This is a very good thing to know/learn about as it could give you the edge in battle. One
of the new mechanics is that you can now grab the ball and manually throw it (with default
keyboard - Z). Even is the ball is going at a slow speed, the throw will momentarily launch
the ball (either left, right, or down) very fast. Furthermore, parries are now back from the
first game. When you smash the ball, if everyone keeps trying to hit it immediately afterwards,
use the parry to stun them, giving you a free hit/kill. In order to do a parry, one must hit
the ball, then press (keyboard) X, which upon doing correctly, will have a blue ring around
the ball and the opponent will be stunned. Doing a parry will deplete your energy but if
successful, you will gain full energy. ALSO, if you see a player doing a parry (the blue
ring around the ball), you are able to grab the ball from them which will do major damage.
One new thing that I just found is that if you happen to fall onto the floor (laying down),
if you press the hit button (keyboard C), and the ball is coming to you, it will allow you
to have the ball float in front of you for a few seconds which you could use to hit the
ball. During that time, no other player can hit the ball.

Other Things:
With the in game currency, you are able to buy music tracks, new stages, the new characters,
several new gamemodes/returning gamemodes (such as: Lethal Volley and Strikers). There is
also a leveling system for online matches which will give you additional currency for every
level-up. Although I am not quite sure (since I am only level four at this time), I think
you may unlock new things from leveling-up just like the first game (like new balls?).
There are also ranked matches now and leaderboards.

Speed Scaling:
Wondering why you can't get to a million in training as fast as you could in the original
Lethal League? This is why. This guide will briefly explain about a new system that affects
the speed the ball gains from smashes.

Introduction:
There's a new mechanic in the game that affects how fast the ball is allowed to gain speed,
preventing a single player from being able to send the ball to extreme speeds on his own.
This mechanic doesn't seem to have a name, so for now I'l giving it the tenative name Speed
Scaling. This short guide will explain briefly on what Speed Scaling is, and how it forces
players to not spam smashes all the time.

This modifier is reduced by 25% each time this happens, and is multiplicative. So on the
third smash, the modifier goes from 75% to 56%, then 42% on the 4th smash, 31% on the 5th,
23%, 17%, 13%, and finally, 10%, at which point speed scaling will stop. In a normal game,
it's highly unlikely that speed scaling will ever cause the speed gain modifier to hit 10%
(as you'd need to have smashed the ball 9 times before another player takes it), but it
is possible. You can observe these effects youself by going into Training and spamming
smashes on the ball over and over again.

1) Use a downward aerial swing.
Hitting the ball with a Dair will reset the modifier to 100%, allowing you to double the
ball's speed with a smash again. Keep in mind that you'll have to use them every so often
if you want to be increasing the speed a lot. This is the only way that you can reset
speed scaling, so you'll want to get familiar with that attack if you want to be doubling
the ball's speed often.

2) Lose control of the ball.
If another player takes the ball from you, or if a new Burst starts, Speed Scaling will
also reset to 100%.