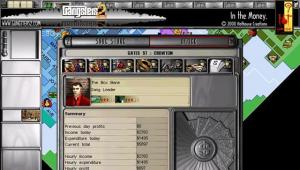 Set in the fictional state of Temperance during the early years of Prohibition, Gangsters 2 is the story of one mans fight for vengeance. Joey Bane, recently returned to his home town after serving overseas with the army and struggling to acclimatize to civilian life, is devastated when his father is gunned down whilst trying to earn a few dollars running liquor for the mob. Joey's uncle is also badly wounded in the attack, but manages to pull through.

24/7 GAME PLAY
Both day and night now play an equally important role in your strategy and movement around the city. Open up brothels and hit bank vaults in the small hours whilst running legal businesses during the day.

IN-GAME ADVICE
The advisor is there to assist you as you move up the ranks from a fledgling hoodlum to a feared and respected made-man. Listen and learn!

REAL-TIME STRATEGY
Move your units into action more effectively with devastating results, all with the click of a mouse button.

IMPROVED GAME FEEDBACK
A daily newspaper will give you the low-down on all aspects of your criminal empire as well as a whole host of other game play related information.

LARGE CAMPAIGN MODE
Wreak havoc across the state of Temperance and engage in battle through 20 episodes spanning 15 counties, or indulge in multi-player combat with friends.

SPECIALIST CHARACTERS
A whole host of new characters are available for you to command; build up your team members experience points and take them onto bigger and better things by transporting them in the family tree.

I don't have comments

this game looks wicked but why does it have to be 152 mb. it would take me 3 days to down load.

I loved the game, I thought it was funny. Did you guys even play the full version? Probably not, cause the game was wicked, and its hard for a game to impress me. Can someone email me when they get a crack for it.I would buy it but I play other games more than it, but its not a bad game.

Hey, this game is cool. Because it take place back then when old guns are used. Like Al Capone. It's very cool, but it takes alot of time to win. Without cheat code.

For those of you who didn't play this game,shut ur mouth!It's a great game,not like what all you hav said.Nothing much to comment though,it's a great game!

i am still downloading it i hope its good

it's one of the best games I ever played

very good game, the best one

it's really cool men take it to your self men goodbye

i want this game NOWWWWWWWWW!!!

give me the game

how much is the game in the uk

really do you slaughter people f**kermora

please leave this games thanks you

this game i really cool!!

i relly didnt understand the first one.I hope this one has a better tutorel

I realy love the Game it is the best game i've seen in my life.

I had play the first's one it awesomegame.

This Game Owns ... And Gangsters 1 Owns also...You Had To Think with that game, and it wasnt that easy and thats what i like about a game...I Finished Both Games a long Time Ago , but still ... Hallelulia

This game is for babies!!!

I hope this game is nice.Gangsters1 was easy...too easy.i hope everyboidy enjoy the game :P