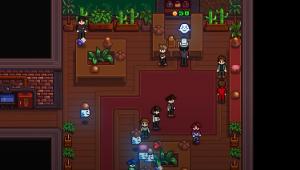 Concerned Ape, the once-lone developer of Stardew Valley, has announced its next game: Haunted Chocolatier. It'll be immediately familiar to Stardew Valley players, as it appears to borrow not only the pixilated graphics style, but even some of the assets appear to be reused, or re-colored from Stardew. That's all forgiveable though, as Haunted Chocolatier is still in the very early stages of development. The premise however, seems more than a little intriguing.

It seems you'll play the town's new "Chocolatier" and you'll have a shop to set up, ghosts to hire to manage it for you, and an otherwordly realm to travel to in order to get ingredients to make your range of various confectionary.

It's incredibly cutesy, and seems to have a lot of the relationship elements that fans of Stardew tended to enjoy. It's also much more visually impressive, with reflections, dynamic lighting effects, and more detailed objects and environments -- even if it is still done in the same pixel-style.

The game is designed to be a little less humble, a little more fantastical than Stardew, as Concerned Ape explains.

"Chocolate represents that which is delightful. The haunted castle represents the allure of the unknown. The ghosts represent the imprint of the past. All of these things are important. However, don’t think for a moment that, because this game features ghosts in a haunted castle, it is an evil or negative game. On the contrary, I intend for this game to be positive, uplifting and life-affirming. However, if Stardew Valley mostly channeled the energy of the sun, Haunted Chocolatier channels the energy of the moon. Both are vital."

Ultimately, he said, he just wants to make a fun game.

No word yet on when the game will see the light of day, but he suggested it could be some time.

How many tens or hundreds of hours did you put into Stardew Valley?