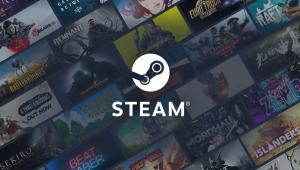 Steam has been on the up and up in the last few years, with user counts steadily increasing. According to SteamDB, everyone’s favourite gaming platform hit a new high this weekend, with a peak of 33,078,963 players logged into the service, all at the same time.

This record beats the previous one, set back in November 2022, which saw Steam player counts grow after Thanksgiving celebrations were over. That record broke one set in October, and that one broke a record set in March -- so it’s fair to say Steam has seen some meteoric growth in the last year in particular.

Of course, given that Steam automatically starts for most people, you can expect a large number of those to be idle users, with Steam happily purring away in the background. However, January 8 also saw a record number of active players at the same time, as well. According to SteamDB, Steam’s number of active players rose to 10,284,586, a truly astounding amount of people. In fact, it’s the first time Steam’s active player base has ever risen above 10 million.

It’s entirely probable the continued swell of player numbers has to do with the increased numbers of Steam Deck consoles now available. The holidays will likely have seen an increased number of Steam Deck players, and not being chained to a desktop computer or laptop is likely a massive driver of more gaming hours. If this is the case, then expect to see numbers continue to grow, as the Steam Deck becomes more and more ubiquitous. Even with the recent news the next Steam Deck isn’t likely to be more powerful than the previous version, you can expect the lure of mobile Steam gaming to be a strong one.

As you might expect, the most popular games being played were some of the biggest on the service, with Counter-Strike: Global Offensive, Dota 2, and Grand Theft Auto V sitting comfortably in the top ten. Wallpaper Engine and Amazon-powered MMO Lost Ark were also amongst the top played, but so was Among Us-like game Goose Goose Duck, which has recently been propelled to popularity on the back of some K-pop endorsements.