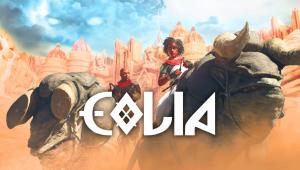 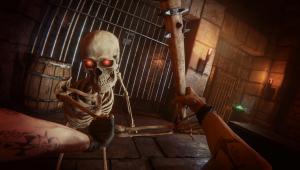 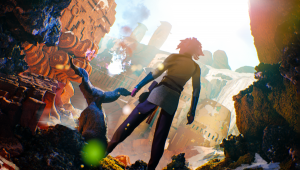 Restore a World at Risk in Meta Quest 2 Exclusive

EOLIA, the VR fantasy-adventure follow-up in the award-winning Rhythm of the Universe series, saves a land in a climate crisis today on Meta Quest 2. Developer ROTU Entertainment will donate a portion of EOLIA’s proceeds to a climate-conscious non-profit selected by the ROTU social media community.

Trek through Eolia on the back of the mythical horse-like Lhargo as explorer Conga Dholak on a mission to protect his once-thriving planet from an ecological disaster. Extreme weather and drought plague Eolia’s deserts, peppered with the ruins of a lost civilization and on the brink of environmental collapse.

Journey through this time-worn land in search of 25 collectibles and over 300 useful items while solving puzzles rooted in musical theory to bring Eolia back to its former grandeur. With ground-breaking Hand Tracking technology, available only on Meta Quest 2, play ancient instruments, flip through your inventory, and reach for change with intuitive hand gestures.

The fate of Eolia rests in your hands.

● Grip ledges, saddles, instruments, and more with your own hands for an immersive experience.