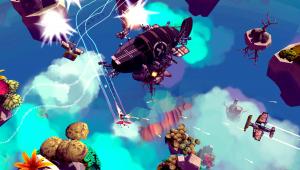 Trophy - How to unlock - Type
A bit of a pirate myself - You brought down an oil trader zeppelin to steal its valuable contents. Don't let the police catch you committing such crimes! - Bronze

Ace pilot - You reached Autumn Forest just with your "Pinty Canary". That's a true testament to roaming among the pirates with your starting plane. - Bronze

Army of one - You've crafted every single weapon in the game! You could equip a real revolt against the topsiders now! - Silver

Collect 'em all- You own every piece for every airplane in the game. How come you're still living in the underbelly of Granaria? - Silver

I am from - You returned home from Snow Crest Altitude. Don't give up, you're so close to reaching the stratosphere. - Bronze

I'm an artist - You flew a plane made out of three plane parts from different airplanes. You did some really good work with what you had available, right? - Bronze

Machine Annihilator - You annihilated a gold security drone. They are equipped with the most dangerous weaponry in all the skies, making you the destroyer of machines! - Bronze

Make me clan king! - You annihilated a famous red pirate ace. The king of the pirates! Maybe they'll crown you queen now! - Bronze

Moby Dick - You fought and caught the small whale. Apparently it's just a baby, so how big will it grow? - Bronze

The City - You successfully defeated the "Archipelago", the floating nomadic settlement of the air pirates. - Bronze

The Lie -You successfully defeated the "Whale", and uncovered the truth behind the mythos. - Gold

The Snake - You successfully defeated the "Titan", the frightening guardian machine of the drone security. - Bronze

The Zeppelin - You successfully defeated the "Lillianne", the mobile pirate airbase. - Bronze

Tinkerer - You made your first weapon, and just out of the trash you found in the skies! - Bronze