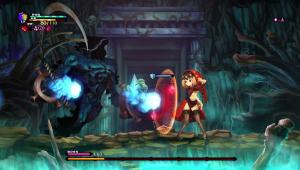 Unlockables:
When you beat the game the following features will become unlocked.

Unlock Wheel of Fate Scenes:
When you complete the following tasks the corresponding Scene will become unlocked.

Wheel of Fate: Scene 2-1 (Epilogue):
Unlock by viewing every scene in the game, including both endings and ALL Armageddon scenes.

Wheel of Fire: Scene 3-1 (Curtain Call):
Unlocked by viewing the 'Wheel of Fate' book and watching the credits roll. At the final scene, don't press any buttons and the scene will be unlocked.

Unlock Extra Book: Wheel of Fate
This book becomes unlocked when you get the 'Good Ending' which is achieved by fighting ALL the final bosses with the appropriate characters.