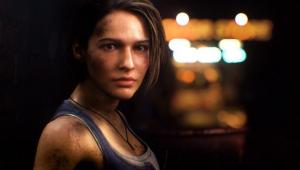 Free items:
Go to the internal PS4 settings. Choose "Settings" -- "Application Saves Data Management" -- "Saved Data" in System Storage, and copy the save file for Resident Evil 3 that says "system saved data" to either your Online Storage or USB, then start up the game. Go to "Bonuses", then "Shop", and buy any item(s) from the store that you can afford. Then, load your save. The item will appear in your storage box. Save and quit the game. Go to "Settings" -- "Application Saves Data Management" -- "Saved Data" in Online Storage/USB for Resident Evil 3, and overwrite the system saved data in the System Storage with the data you either saved online or on the USB. Repeat this process as many times as desired. Note: The costumes do not work with this trick, as it is saved to your system save data file. You cannot stack more than two coins/pouches. If you want both of an item, you have to do both options as they are unique. They do not need to be done at the same time, but selecting half twice will not give you two. The Hip Pouches do not appear in the storage box -- they appear next to it.

Inferno mode:
Successfully complete the game on the Nightmare difficulty to unlock the Inferno difficulty.

Nightmare mode:
Successfully complete the game on the Hardcore difficulty to unlock the Nightmare difficulty.

Farming zombies:
Reach the "Defend Jill" section of Carlos' segments. Once you have cleared out the room and Tyrell wants you to use the detonator, do not use it. Waves of zombies will continue to spawn three or so at a time and crawl over the pallets. Combine this with an infinite ammo weapon/assault medallions to easily complete the zombie killing records. However, the longer you farm them, the more likely they are to turn into Nemesis Head zombies when they make it over the barrier. If the zombies stop spawning, you can quit and reload your autosave to start back at the last phase of the "Defend Jill" encounter.