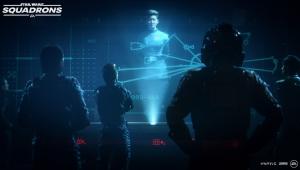 How to Evade Missiles, Prevent Lock-Ons and Use Countermeasures:

How to Prevent Lock-Ons:
Before an enemy can fire a missile at you, they need to complete a lock. To
prevent them from completing the lock, you can make erratic movements to
throw off their tracking, or use the environment such as placing asteroids or
space stations between you and them. Generally, if the enemy cannot see you,
they cannot get a lock on you. Also, there are components that you can apply
to your starfighter that will prolong enemy lock ons, like the Scrambler
Shield and Dampener Hull.

How to Evade Missiles:
Once a missile has been fired at you, it is possible to avoid it by taking
evasive action. Make quick sharp turns in different directions to maximize
the chances that the missile will miss. Set your throttle to half speed for
better maneuverability and to further increase the odds in your favor. Also,
if you have charge in your boost meter, you can outrun certain missiles.
If you have mastered the art of drifting, you can boost past an obstacle,
drift and turn, and boost again to duck behind cover.

How to Use Countermeasures:
If you're in a position where taking evasive maneuvers isn't feasible -
like in a narrow tunnel or during an attack run - you can use your
countermeasure. There are four types of countermeasures that all perform
the same root function: preventing the missile from hitting you. Get familiar
with the effective range of the countermeasure you're using, and then
activate it when the missile is within that range to save yourself.

How to Disable Motion Blur:

Enable DirectX12:
Maybe useful maybe not I found this setting disabled. Same place as motion blur DirectX12
is set to 0 change that with 1 and save.

How to Boost & Drift:
There’s a number of tricks that ace pilots can pull to get out of dangerous
situations and to gain an advantage over their opponents in Star Wars: Squadrons.

Boost and drift are two such maneuvers.

How to Boost:
Boost must first be made available by overcharging your engines. Press D-pad left 1 POV west to transfer power to your engines. When the blue engine power bar is full, a yellow meter will start to fill, representing the amount of boost that will be available; the more the gauge is filled, the longer you can boost. Once there is some charge in the meter, you can click the left thumbstick L3 press Space JOY 9 to initiate the boost.

The yellow boost meter will start to drain, and when it is empty the boost will
disengage automatically. You can disengage the boost manually at any time by clicking the left thumbstick L3 press Space JOY 9 a second time.
Note that although boost will grant you an enormous burst of speed, maneuverability will be significantly reduced.

How to Drift:
Now that you have learned how to overcharge the engines and boost, the next step
is to learn how to drift. While boosting, you can click and hold the left thumbstick L3 press and hold Shift JOY 9 and turn your ship in any direction with the right thumbstick R3 Mouse X axis JOY 0 axis.

Your ship will continue on its current heading but you will have a brief period of directional control that will allow you to fire perpendicular to your direction of travel, spin around 180 degrees and fire on a tailing enemy or shoot down an incoming missile. Or, you can trigger another boost (provided there is still charge in the boost meter) and perform a sharp 90-degree turn around an obstacle to shake pursuit or evade a missile.

How to Fix Crash to Desktop from Active Flight Gameplay:
The game just closes during the flight, sometimes at the beginning of the
mission, sometimes later. So far I've only seen this in solo modes: company
and training battles with AI.

Guide to Fix:
It turned out that there are several factors and as a result thre is
several solutions:

Set the "Volumetric setting" video quality parameter to Medium.
This may be enough. In my case, this probably only reduced the number of crashes, but did not solve the problem.
Switch to windowed mode (with frames). When switching to this mode, the window may turn out to be much smaller than the screen, but if U maximize it maualy,
the fix may not work. However, you can enlarge the window slightly.

This "fix" helped me, although it looks more like a workaround and it's sad to
play in the window.

But the scope of the bug seems to be quite narrow:
Specific moments in the training mode of the battle of fleets with AI.
Specific moments of the company. There seem to be few such moments and they are
concentrated in the initial missions. Then you can try to return to normal settings. 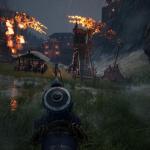