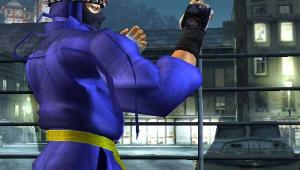 To stand a chance against more experiences and stronger computer and human opponents, take a defensive role, especially with computers. Hold guard G and let them unleash their string of attacks, keeping in mind to watch them so you can change position to block both high and low attacks respectively. When they are done with their combo, their character will temporarily stall as they gain their neutral stance, this is when you drop your guard and open up a can of your own.

Before the SEGA logo appears in the rolling game demo, press and hold CIRCLE button, and you will be able to hear the old ''Seeegaaa'' voice. Fans of old Sega games will definitely recognize this.

Get to the Sega Area Uptown stage using Quest mode. You can now purchase Dural from the shop.

Use arcade mode and get to Dural's stage and have a total number of wins with a 9 as the last digit.

Reach Dural in under 6 minutes.

You can buy new victory poses in the shop. Hold Punch Guard or Punch Guard D-pad during the replay to use them

Use quest mode and get to Sega Are Upton stage to unlock them. Now HOLD Start at the versus mode select screen when picking a stage to make it the original version