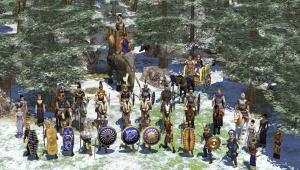 Wildfire Games proudly announces the release of the first alpha version of 0 A.D., a free, open-source game of ancient warfare. After 9 years since the concept of 0 A.D. was designed on paper, we have a close approximation of a playable game. This release comes with aggressive units that attack enemies on sight, lifelike animals that escape danger, two new maps, in-game multiplayer chat and much more. Alpha releases of 0 A.D. will each get a number and a name, so this one is "Alpha 1 Argonaut".

0 A.D. is a free, open-source, cross-platform real-time strategy (RTS) game of ancient warfare. In short, it is a historically-based war/economy game that allows players to relive or rewrite the history of Western civilizations, focusing on the years between 500 B.C. and 500 A.D. The project is highly ambitious, involving state-of-the-art 3D graphics, detailed artwork, sound, and a flexible and powerful custom-built game engine.