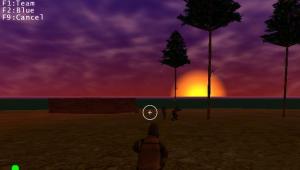 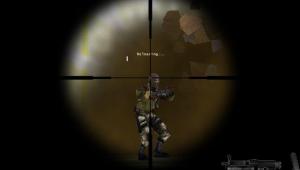 Tropical Storm is an extremely well made First Person squad based wargame.
In the game an unlikely partnership between Marxist rebels, drugrunning Facist insurgents, and terrorists from the Greenland Liberation Army has established several bases on small islands in the Pacific Ocean. As a commando with a fairly dramatic-sounding name, it's your job to blow them to bits.

Your mission will be complicated by the large number of identical looking Commie soldiers prowling around the island. Moreover, using ancient Marxist reincarnation technology, they will reappear alive and well at a bunker, several seconds after being killed. So, you have to move fast to destroy all the buildings you can with your absurdly powerful grenades. You can't blow up the bunkers, so don't even try.

A variety of multiplayer modes are planned.

This game is really good and its free. It got good graphics and im so bored and im f***ed and im talking on msn and im ****** and bye

doesnt work right... oddly enough, it seems to work fine the first level u play each time u restart your computer, and then after that it goes at 0.01 fps and takes it bout 10 mins. to register that u pressed escape. if u control-alt-delete it, the size of everything will be all fecked up. this game would kik *** if it worked right. o yea i like the xplosion effects

this game is slow to dowload, butit is my kind of game, if you likewore, or shooting matereal.i would rate this game 3 starsout of 5.

how do you cahange views in this game? I right click on the mouse to get "sniper" view but nothing comes upAnyone got answers?

I have dwonloaded this game but the screen shots posted on this wbesite look nothing like the game! Anyone out there?

THIS HOPELESS PIECE OF SH** GAME GAVE ME A VIRUS!!!! DO NOT DOWNLOAD IT LOOKS OOD BUT IS A VIRUS

Is there anymore updated downloadable games? If you get any new ones please tell me.

The game doesnt have any viruses. I dont have any clue what these ppl are saying. anyway, this is probabbly the best first person freeware game ever made (unless they make a game like doom 3 but thats another story) but for now this is the best freeware firstperson game.

um... hmmmm counter strike wana be the models in it are models someone made for cs... whata rip...

What the f**k is stuart talking about?! This has no damned f**king viruses, stuart, ya' f**king f**khole!! And to the person who posted before me, if THIS is a ripoff, THEN HALF THE f**kING THINGS ON EARTH ARE RIPOFFS!!!! Ya stupid d**k-headed homosexual ***!! You've probably ripped something off in your life, too!!! f**k you. In other news, this game rules and the explosions are f**king awesome. Oh, and f**k you, stuart.

Stuart you little muthafuka!!I smacked both of your gay dads up last night!! your whole family are sick HOMOSEXUAL MUTHAFUKAS!! GO f**k YOURSELF!! VIRUS,MY f**kIN' *** YOU DUMB ***!! f**kin hell man ;>(

faulty link anyone know where i can get it somewhere else?

THe link doesnt work the download sites dont work either wtf is this???? they better get this porb fixed up............

stupid site, keeps saying unable to to chaptcha os what everAND TOO MANY DEAD LINKS!

Listen to all of you rant and rave about something that doesn't cost you anything more than a little bandwidth time. All of you need to take some pills and chill out. Sorry but in the real world things take time. GROW UP KIDDIES. (Metaphorically speaking for the smarta**'s out there.)

Get it at caiman.us me downloading mateys!

a very good game and hey its free

i hope this game is worth my time