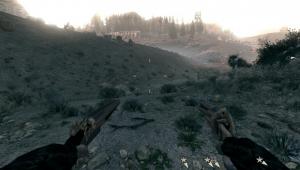 This is a mod of the CoJ: Bound in Blood Single Player. While Call of Juarez: Bound in Blood is an excellent game, it isn't quite realistic enough. This mod was created to make the game, the weapons, and the gameplay more realistic. Below are a few highlights of the mod: Several custom fields of view to choose from. Now you will not have to use the very low default FOV. All variations of all of the weapons have now been added to the Story, for example the Classic Rifle with Sniper Scope can now be found and bought in many levels. Adjusted the single-action cocking speed, the character will now cock the revolver before every shot instead of firing almost semi-automatically. Many of the weapons are more realistic, such as the Lemat Revolver which now fires a shotgun shell instead of a rifle round. Many of the levels have been slightly modified and many weapons have been added to gun shops.