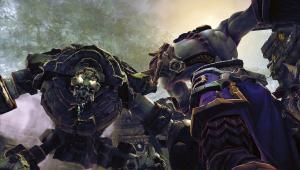 Search one of the indicated locations and/or perform the listed task(s) to get the corresponding Legendary item:

Successfully complete Waves 51-75 of the Crucible.

Find the secret treasure on the fifth level, and find all the Sacred Tomes.

Search for a room after leaving the main large chamber where you meet two new Legion enemy types –- the Champion and Soldier. Inside the large circular shaft on the eastern section of the dungeon, drop down to the very lowest grab-able ledge, and circle around to find a hidden path. Then, go down the path, and climb the back wall to find another secret area where the weapon is located.

It is rewarded automatically for finding all four GnoMAD Gnomes.

In the open courtyard on the southern section of the map, you will need to solve a puzzle to continue past the water aqueducts. In the same area, there are Corruption crystals hiding a switch. Destroy the crystals, and pull the switch to open a gate. Instead of leaving, drop down from the cliff with the switch, and go to the end of the aqueduct to find the weapon.

Successfully complete Blackroot's Stonebite side quest to unlock the weapon.

This can only be unlocked during your second playthrough. In New Game+ mode, defeat the Icebound Guardian to unlock this weapon.

This can only be unlocked during your second playthrough. In New Game+ mode, successfully complete Draven's side quest to return the Bloodless Talisman and get this weapon.

Area: The Well Of Souls

Successfully complete all 100 waves in one session.

After fighting the Noss and escaping into the underground tunnels, you will be inside a ruined hotel. Look for a room with a hill of trash. Inside, look up, and jump to a hidden alcove with the weapon.

Gauntlets Of Savagery (Pre-Order Only)

Successfully complete the DLC side quest for Karn.

Area: The City Of The Dead – First Floor

After leaving the central area and moving through the statue room you cannot yet solve, you will enter a hall through the north door. Inside the hallway, use the ledges to reach a post. You will need to use a 180-leap, and then run along the wall to reach the high ledge to find the weapon.

Mace Of The Everflame

Defeat the Samael boss to unlock it in New Game+ mode.

Use the downloadable code that comes with the Darksiders 2 novel to unlock it.

Make your way through Constructs, and then swim through the underwater passage. You will come out facing Shadowbomb pods. Find the first Shadowbomb pod in the area, then return to the previous room to destroy some Corruptions crystals. The weapon is located in the alcove blocked by the crystals.

Scepter Of The Deposed King

Area: Lair Of The Deposed King

It is found inside Death Tomb 4. You will need to collect 40 Pages Of The Dead and return them to unlock this optional area.

Talk to the NPC Uriel after finishing their side quest.

It is found inside Death Tomb 2. You will need to collect 20 Pages Of The Dead and return them to unlock this optional area.

It is found inside Death Tomb 2. You will need to collect 20 Pages Of The Dead and return them to unlock this optional area.

Defeat the final challenge at Wave 101.

Successfully complete the Shaman's Craft side quest for Muira.

It is found inside Death Tomb 3. You will need to collect 30 Pages Of The Dead and return them to unlock this optional area.

Make your way through the underground tomb tunnels inside Boneriven. In the second of these tunnels, just as you enter the room, look in the first alcove to your right to find it.

The Crown Of The Dead

Collect all 40 Pages Of The Dead to enter Death Tomb 4. Inside the tomb, destroy all 12 pots to reveal a hidden chest with the armor inside.

Collect and turn in all 30 lost relics to Ostegoth to get the armor.

Shoot five pots in far-off locations to get a secret treasure chest to appear. Two are down the main street, another is near Alya's location, and the last two can be found near Muria's location.

In the temple, you will be trapped inside a large round arena and ambushed by Constructs and Sentinels. Successfully complete the enemy combat scenario in less than five minutes to get a secret treasure chest to appear.

This area will appear while searching for the second Heart Stone. Entering a series of crumbling ruins on the eastern side of the map, look for a western wall to climb to reach a high balcony guarded by Prowlers. On the balcony, after killing the enemies, destroy all pots on the balcony to get a secret treasure chest to appear.

Destroy all three of the huge gravestones, then kill the enemies that attack to get a secret treasure chest to appear.

Once you have got the Soul Splitter, return to the Forge Lands in the Overworld, and check the Fjord. Look around the East Keep. Split up and step on both pressure plates. Then, look at the upper balcony for four pots. Destroy all four pots to get a secret treasure chest to appear.

Eventually you will reach a large southern floating island. The chest can be found when you circle around to the east side of the island. You will need the Voidwalker before you can unlock this chest. In the citadel, look for a portal to your north, and another portal near a Shadowbomb Pod. Run back to the portal away from the Corruption crystals, and throw a bomb through the portal to destroy the crystals. The treasure chest is under the crystals.

Near the beginning, after crossing from the center of the map east across a long bridge and fighting the Corrupted Angel, you will cross a bridge onto a small floating island with another Holy Fire Node. Locate the portal, and look beyond the wall. Destroy the four pots located behind the standing wall to get a secret treasure chest to appear.

At the southern portal to the future, break all the nearby objects to get a secret treasure chest to appear. There is also another large chest inside the circular room.
Defeating Bheithir easily:

While fighting Bheithir, lure her to the right side of the platform. You will be walking backwards if you are locked on her as a target. If timed correctly, you will fall onto a little lip on the edge of the platform. From that position, keep shooting her. She will continue trying to walk toward you, occasionally breathing fire (it will not hurt you) until she eventually starts to fly. Then, a cutscene of you killing her will play.