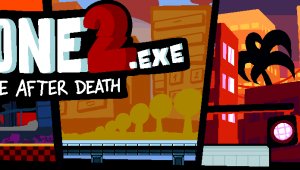 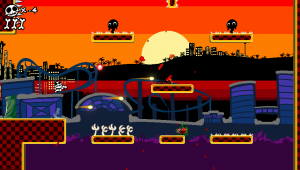 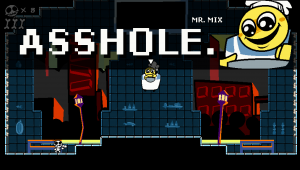 Bone2.exe (son of Bone.exe) is a Game that combines Super Meat Boy + Megaman with a unique world-shifting mechanic, where you switch to a dark world version of the level when reaching below 0 lives (Now things are beginning to make sense, More later).

The story is that some place (I don't know what it's called) is being infected with 'The Zalgo Virus', and everyone hates it! Our Hero, Jumpscare the Skeleton, decides to help everyone fight this virus by collecting a lot of Anti-Viruses (called Fleawalkers)! It won't be easy as there are creepypastas loyal to Zalgo that wish to continue corrupting the land and its people, and will surely try to stop you. Who knows, Jumpscare might even learn a couple things about himself throughout the game.

The Game features:
• 4 (or 8 technically) Chapters that can still be beaten in an hour! Game really keeps your attention, so take it all in, baby!
• Aesthetic Inspired by bad Fan Games that were made in Game Maker / Games Factory from the 2000s!
• Wall Jumping as well as Double Jumps! People who love pressing the Jump Button love this game!
• Very Replayable! (Though that's not saying much, I've seen people make strange choices on what games they call replayable, so I guess take this with a grain of salt.)
• Compressed SFX and Full Midi Soundtrack, to further immerse the player into feeling like they're playing a terrible fan game from 2000-somethin'!
• Each Chapter ends with a Boss fight! Hell, there's even a Secret Boss if you're a slut for that kinda stuff!
• The level design is so good you guys lmao, trust me bro.
• A Super Secret Super Form, where you can become the Legendary Jumpscare.3gp (for 10 seconds)! In this form you are temporarily Invincible, Deal Double Damage and can Double Jump infinitely!
• Unique World switching mechanic where you get sent to Hell if you reach Negative Lives! Fear not: if you get back up to +5 lives, you'll go back to Normal (In Negative Lives mode, the Enemies are harder, but the Platforming level design is easier)!
• Okay, now I don't wanna get everybody too excited, so try to restrain yourselves. But I gotta tell ya; This game features a Special Appearance of BLOODY MARRY at the end of this game! Make sure to play the video game all the way to the end to see what happens, you won't Believe your Eyes or Patience!
• This game does in fact have controller support! Don't let the lack of screen prompts tell you otherwise!
• (COMING SOON) You can also download this game's Unity Source Files! Modders and Curious People alike can go into this game's guts and mess around! All you gotta do is use Unity! Easy! Right!?....Right?

(Note: This game doesn't actually have any real jumpscares, the main protagonist is simply called "Jumpscare the Skeleton")

Incredible! Now that you're absolutely dazzled by these Screenshots and this huge list of attractive Features, you no doubt wanna play this Game.

Don't be afraid, it is as simple as pressing the Download Button, and extracting the files from the .rar file into a freshly created new Folder on your computer.