You voted 1. Total votes: 28
9
1 Freeware available for Cyberun, see below

CyberRun is a Cyberpunk Endless Runner game, in which the whole universe of the game is connected and reacts to certain stimulus of the gameplay.

It works like Temple Run or Minion Rush: the player runs endlessly through a landscape that is randomly generated, dodging obstacles and collecting 'coins'. However, CyberRun have a really beautiful sci-fi art, with futuristic and animated neon textures, and with a exciting gameplay.

The game has a very futuristic style, where the player controls a fully digital character in a digital world.

The music beats react with the cybernetic textures, making them change color and intensity, as is played in 4 different themes. The universe where the game is set have a high level of brightness, and gambling is really fun, pleasing any child and serving as a pass-time for any possible bank queue.

Soon available for iOS and Android. 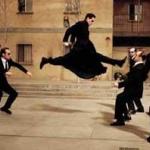