The Elder Scrolls IV: Oblivion - Knights Of The Nine 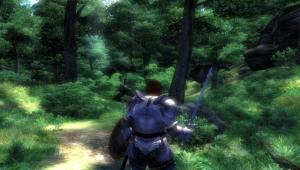 Cheats:
Press ~ during game play to display the console window. Then, enter one of
the following codes to activate the cheat function.

(*1). For example, enter modpcs blade, 10 to increase your blade skill by 10 points; it will not set it to 10. Raising your skills in this manner will cause you to level up, but will not give you any attribute bonuses when you pick which attributes you want to increase on the level up screen.

Easy Level Up + Alchemy 100:
First make sure Alchemy is one of your major skills then get at least 2 ingredients, also a mortar and pestle and all of the other alchemy pieces, then use the duplicate cheat on both of those ingredients make about 300-600 of each then go to the mortar and pestle and start pressing the X button like crazy to make potions. In no time your Alchemy will go up along with your level, I trained in between each level up so it got me much farther I went from Level 6 to Level 13.

Unlimited Gold:
-First Method:
In the Imperial City, Talos district, find a house owned by a person named Dorian, it will be called "Dorian's House". Try to get him angry enough with you via threatening him. Once he has a low enough disposition (lower than 20) with him, he will ask you to leave. At this point kill him and go to loot his body. He should have around 40 gold and some other misc items. LOOT ALL THE ITEMS FIRST leaving the gold, DO NOT LOOT ALL. When you go to take the gold, it will glitch and keep allowing you to take the gold off him. Make sure he doesn't leave or alerts any of the guards and save before attempting this. After about an hour of hitting the same button, I had 150k gold. Note: You can bribe him before doing this glitch and you'll make more gold.
This no longer works after a recent June patch to the game.

-Second Method:
First you have to complete the Cure for Vampirism mission, and talk to The Count, Janus Hassidor. When you talk to him, ask him about the "Reward" conversation option, but don't leave the conversation, and keep asking him about it. Every time you ask him about it you receive 1000 gold (or more depending on your level). Do this as many times as desired for unlimited gold. Note that a recent June patch has fixed this glitch.

Attributes CheatEntry Location:
Bring up the console prompt with the `/~ key, then enter the code.

Crusader's Armor Hates Sinners:
During your quest for the Relics, if at any time you violate the law (thievery, murder and the like) the armor will unequip itself from you. To be able to equip it again you must walk the Pilgrim's Way again. So it is advised that you either finish Knight of the Nine before proceeding to the Thieves Guild/Dark Brotherhood, or finish Thieves Guild and/or Dark Brotherhood before Knights of the Nine.

Umbra's Ultra Stuff:
Umbra is a sword; It's most likely the strongest sword in the whole game. To get Umbra, you have to find the ruins called Vindasel around the Imperial City (Just circle the water around the City until you find it) and beat the woman who is deep inside. It may sound easy, but the woman wielding Umbra is really tough. The hardest boss in the game almost. Her armor is Ebony, so you might want it to use or sell to your liking. When facing Umbra, turn the difficulty all the way down. It makes it only moderately hard. Umbra won't attack you unless you attack her first. There are pillars around the center of her room. Affix yourself on top of one of the pillars, and unleash your bow and arrow
fury on her. It will take a long time since arrows only take a little bit off her health bar, but as long as you're on the pillar and you have a lot of arrows, she is screwed. Umbra will simply swing and run at the pillar, while you bombard her with your arrows. It's a tedious process to do it this way, but the treasure you reap from her corpse makes it worth the effort.

Avoid repeating Way Shrines:
Once you pray to all nine Way Shrines in the process of starting Knights Of The Nine do not commit a crime that will raise your infamy. You have two chances, and once you make a second mistake they will strip you of all the Crusader armor. If you have not gotten the armor yet, they will not let you wear it until you repent, which means going back to all nine Way Shrines again.

Advantages Of Relics:
All are good items for their basic stats. - The Relics can be leveled up to keep pace with your character, so you really never need to replace them. Besides, this avoids the embarassment of selling these holy artifacts once you've outgrown them. This is done on the display stand in the basement of the Priory of the Nine.

- The display stand also fully repairs and recharges the Relics, so you don't have to spend any money on that, either.
- The above features remove much of the money-
grubbing pressure from your character, allowing you to just have fun without worrying about getting every last arrow back to town to sell.
- The Relics give you a bunch of Lesser Powers that allow you to act like a real saint. You can buff and heal others at a ridiculously low magicka cost, for instance.
- Completion of the quest line (as in acquiring all the relics) makes you a faction head with your own guild hall (Priory of the Nine) and private army of NPCs who will fight with you (1 at a time). Part of the deal is your own chapel with functioning altar. You also get a smith to repair non-Relic items, although he charges normal rates for this.

Disadvantages To The Relics:
You can only equip the Relics if your Infamy is 1 or less. If your Infamy ever reaches 2 or more, you must repeat the Pilgrimage to a Wayshrine of every deity. This resets your Infamy to 0, allowing you to use the Relics again. - Items and effects that temporarily increase your Infamy have the same effect. For example, the relics will not equip when the Gray Cowl of Nocturnal is equipped.