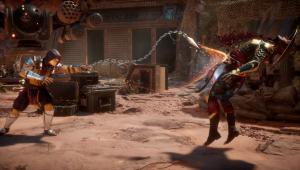 Team Battle mode
At the main menu, select "Konquer" then "Towers Of Time". Successfully complete the four tutorial towers to unlock the main towers. These change every few days. One of them is usually a boss tower. You can tell because it only has one opponent in it. Select the boss tower, and it will display the "Group Battle" screen. Select "Search For Players" or "Invite Players". Once the match begins, you will unlock the "Teamwork" trophy.

Mercy finisher
Mercy is a special move that revives a dying opponent and gives them a bit of health back. It can only be used in the last round of the match. When the game says "Finish Him/Her," stand at mid-distance and quickly press L2 + Down, L2 + Down, L2 + Down. To make it easier, just spam L2 + Down in quick succession. Additionally, by performing a Mercy finisher, you will get two hearts instead of one.

Easy towers and rewards
AI Fighters can be used as substitutes for almost every Tower Of Time challenge. To use them, simply toggle on the "AI Fighter" option after selecting a character, but before entering a battle. Using an AI Fighter will earn you the exact same rewards as a standard fighter. All you need to do is press continue between fights. For most battles using AI Fighters, put most points in the "Combo" and "Reversal" stats. To change AI Fighter settings, go to "Kustomize" and select a character. Then, choose any "Kustom Loadout" and go to the AI Fighter tab. All loadouts can be customized with AI Fighter settings —- you do not need to create a new loadout. The best AI Fighters are Noob Saibot against anyone, and Skarlet against fast rushing characters and powerful zoning. Some bosses and hard battles cannot be completed with just the Combo and Reversal stats. If your AI Fighter is losing, try switching tactics. Select a "zoner", or a long-range character that is good at using projectiles and other abilities. Skarlet is a powerful zoner —- equip projectile skills to her loadout, and boost the "Zoning" and "Runaway" stats to 30. Additionally, hearts are one of the rarest currencies in the game. To get hearts, you need to kill opponents with a fatality or brutality. You only get one per fight, so it can take awhile to get 250 —- which is required to open a Shao Kahn chest. To easily grind hearts, enter the Klassic Endless Tower and use an AI Fighter. They will continuously fight, using finishers, and climb the ladder until they are defeated. You will get lots of hearts using this method -- without having to do much of anything.

Easy head chests in Krypt
To unlock all head pike chests in the Warrior Shrine, simply hold Square when selecting the Krypt from the Konquer menu and do not release Square. Keep holding Square as you make way to one of the pikes where you place the head. When approached, the head will be placed on the pike regardless if you earn it or not. Placing the heads will unlock Tsang Tsung's Throne Room. Note: This glitch was performed on an unpatched version of the game. It may eventually get patched. To avoid not being able to use this exploit, either do not install new patches before using this exploit or delete the patches. You can avoid patches being installed by disconnecting from the internet until you are ready for the game to install new patches.

Unlocking skins
Successfully complete a character tutorial (go to the "Learn" menu, scroll down to the bottom, and complete the series of tutorials) to unlock a skin for the character used. This can be done for every character in the game.
Go to the Tower Of Time, and check the left-corner to find Character Towers. Spend 25,000 koins to unlock these towers. Character Towers are tower challenges tied to specific characters. You will earn gear for your preferred character —- and you can get two extra skins if you complete them. They are very difficult -- so it is recommended to wait until you have leveled up before attempting these challenges.
The rest of the skins can be unlocked randomly as rewards for completing Tower Of Time or Klassic Tower challenges. These rolls are completely random. If you want better chances, visit the Krypt. At the Krypt, open chests that cost between 10,000 to 15,000 koins. These chests usually contain a skin for a random character. Chests that cost between 12,000+ or 14,000+ almost always contain a skin inside. Note: If you have opened all the chests on the island, you can reset the rewards by finding the blue/white orb in the main Courtyard near the entrance and use a special key to reset all the chests in the area. There are two of these reset icons -- one is underground, and one is above ground.

Secret skin and rewards
Reptile can be summoned in the Krypt to unlock a secret skin and other rewards. To summon him, unlock the Skeleton Key door in the back-left corner of Goro's Dining Hall to gain access to the Torture Halls —- past the two trap hallways, you will reach a dungeon. Unlock the second gate on the right with another Skeleton Key, then activate Kenshi's Blindfold to reveal a secret cracked wall. Smash through the wall to enter a hidden area. There will be a short cutscene, introducing Reptile. He will now spawn in various random locations throughout the Krypt. If you find him with Kenshi's Blindfold, you can hit him with the hammer to unlock a secret skin and 200 Soul Fragments. Reptile will spawn in the following locations. Check them all and hit him multiple times for extra rewards.
Dead Woods: In the back-left from the entrance, near the 10,000 Soul Fragment container.
Gardens: Outside the Gazebo, next to the gnarled tree.
Goro's Lair: Directly to the right, in the small cave, after riding the main elevator down.
Lower Pit: In the center of the area.
The Armory: In the center of the room, past Goro's Throne Room.
The Courtyard: In the small exterior area, accessible only from the Jails elevator; near the heart chest.
The Pit (above ground): Across the 2,000 Soul Fragment bridge.