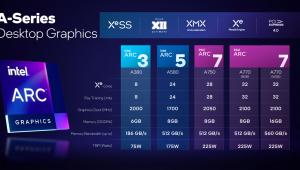 Intel has announced the full run of its first batch of Arc discrete graphics cards, and all of them are priced around the $300 mark. Designed to offer competitive performance to the RTX 3060, or even more in some cases, the new cards start at $290 for Arc A750, with the A770 and A770 Limited Edition costing $329, and $349 respectively. Those GPUs fit into the Arc 7 category, with Arc 5 and Arc 3 GPUs coming a little later.

Intel was long expected to launch its GPUs at some point during the GPU pricing crisis. A third player in the game at that stage, even with middling performance, would have been a huge deal, as gamers were willing to buy any GPU just to get playing. When that didn't pan out, there was a lot of concern that Intel had missed the boat. But with all of its Arc cards priced at affordable levels, fleshing out the entry-level market which is full of cards like the RX 6400 and RTX 3050, which are barely better than cards released years ago, could be a real boon for budget gamers.

The Arc cards should be decent alternatives to their Nvidia and AMD counterparts. The Arc A750 will have 28 Xe cores, 28 ray tracing units, and a 2,050MHz clock speed. It will have 8GB of RAM, with a TDP of 225W. The A770 is a binned version of that same Arc 7 GPU, but with 32 Xe cores, and a 2,100MHz clock speed. The A770 special edition has the same cores and clocks, but upgrades the memory to 16GB. All of them have a 225W TDP, which is quite large for a 3060 competitor, but it's intriguing to see how competitive these cards can be.

At the lower end, the Arc 5 will have the same memory bandwidth, but with just 24 cores and a 1,700MHz clock speed. The Arc 3 on the other hand, will be decidedly entry level, with just 8 cores, 2,000MHz clock speed and 6GB of RAM.

These cards will start launching on October 12, so watch this space for reviews and further coverage in the week ahead.