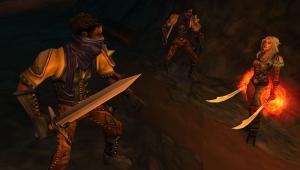 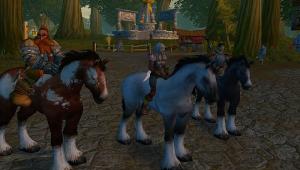 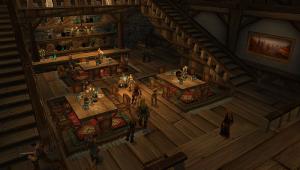 LOS ANGELES, California - May 14, 2003 - Today at the Electronic Entertainment Expo (E3), Blizzard Entertainment® unveiled several new gameplay elements for World of Warcraft™, its upcoming massively multiplayer online role-playing game. During the hands-on demo, the company debuted the game's fifth new playable race, the reclusive Night Elves. These shadowy, immortal creatures were the first to study magic, which they unleashed throughout the world of Azeroth nearly ten thousand years before the events chronicled in the original Warcraft®.

Building on the success of the Warcraft series, Blizzard hopes to expand the MMORPG genre by creating a deep, immersive, user-friendly experience that will appeal to both veteran gamers and casual players alike. The E3 presentation shows off the vibrant world of Azeroth in great detail and demonstrates the significant new ways in which the universe has been expanded.

*Hundreds of quests that drive gameplay and provide countless opportunities for adventure and heroism.

*Thousands of items, including rare and unique weapons and armor with which to customize your character's appearance and abilities.

*Numerous character classes, each with its own distinctive style of play and multiple paths for development.

*Multiple races to choose from, including Night Elves, Humans, Orcs, Tauren, Dwarves, and more to be revealed.

*Several personal modes of transportation, including horses, wolves, and more.

*Ships, Zeppelins, and Gryphons provide quick and easy travel throughout the world

*Instanced zones create a personal combat and adventure experience for you and your companions.

World of Warcraft takes place three years following the aftermath of Warcraft III: The Frozen Throne™, where a great tension has settled over the ravaged world of Azeroth. As the various races begin to rebuild their shattered kingdoms, new threats, both ancient and terrifying, have arisen to plague the world once again. Players must explore the lands of Azeroth, forge fellowships with other players, and build their strength in order to prevail.

lineage 2 has them all beat..and the graphics are very dated

Looks f**king awesome. Graphics only look so-so because of the size of teh dl. Graphics/style = goodly. Up to now i havent played any MMRPG but i think blizzard will be making my _$ a month for this badass game. Its blizzard. How the f**k could you go wrong!?

BLizzard is well know for only making great games... I know they will do a great job with this game. I was already sold on the idea when it first came out. The grahics are so so, but thats not what makes a game. Anyways they are sticking to their style of art. You look at the landscape and buildings and you know its a Warcraft game. Make me proud of you Blizzard, I need something to pull me from Asherons Call

Blizzard has never mad a less than perfect game. Thats really all there is to say.

One thing I like about Blizzard games - free Online. No other games has done better than blizzard.

Oh and dont go 2 any links that start with [url removed] Its sum stuipid gangster game ****. oh and Anonymous, (I mean the one under...!d) Lol stupid f**ked like we dont know that its you wookie...

If the game is only playable online they will be charging people...but they are a nice company and stated that it would be around $10.

hai its a wonderfull thing for those who want playcheat

how do i get the trailer to play all it does is show me the picture of the mage and his steed plus the warrior.