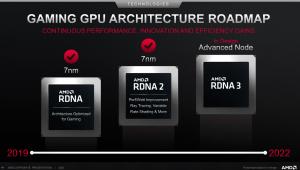 AMD's next-generation RDNA3 graphics cards are expected to make their appearance sometime in mid 2022, and if rumors are to be believed, they could usher in the biggest upgrade in graphics power in any generation ever. Some new hints at the potential of RDNA3 suggest these cards could be anywhere from two to three times more powerful than their predecessors, including the already super-powered RX 6900 XT.

AMD made big gains in its graphics division with the first RDNA generation of GPUs, including the RX 5700 and 5700 XT, but it wasn't until RDNA 2 that it started competing with Nvidia at the top end of the market again. The 6800 XT and 6900 XT can't quite match Nvidia on ray tracing performance, but their general rasterization is right up their with the 3080 and 3090, and if you can find the cards at MSRP, they're good value for money too.

Navi 31 is about 2.5x faster than Navi 21. Similar RT perf to nvidia (though a tiny bit slower like for like). ML still handled as lower precision ops

Although it doesn't seem like any cards will be found at fair prices in the next year or so, for those who can wait another generation, it might be worth it. RDNA 3 cards are said to be designed on a chiplet design, similar to AMD's Ryzen CPUs, with the high-end cards, the Navi 31 and 32 cards sporting two chiplets with 80 compute units each. With no architectural changes, that would give the top card double the performance of the existing 6900 XT, but we can also expect clock speed and IPC improvements, as well as faster memory.

That puts this card as somewhere around 2.75 times the performance of the 6900 XT, on paper. Lower end cards that are more affordable could mean 6900 XT-like performance at 6700 pricing. That's an enormous increase the likes of which we've never seen in one generation.

Ray tracing performance will be massively improved too, according to the rumor, though it may still fall slightly behind Nvidia. With general rasterization so powerful, though, that may not matter.

It will be like 2023 or later before any average gamer can get a decent card without paying more for it than a car. We can't get rdna2 cards, how does amd expect anyone to get these when they make it out. Get more of the cards you have out now and then worry about new ones.