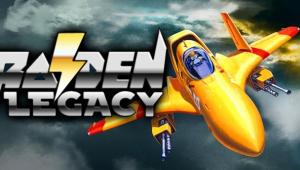 Hint:
When you die, you drop a series of power-ups - be fast and you can collect these
when your ship respawns. Reserve your smart bombs for moments of dire need -
they're ideal for getting out of impossible situations.

Raiden Fighters Cheats:
Play as Judge Spear
At the ship selection screen, move over to the Chaser. Press and hold down, which should bring you to the question mark. While still holding down, press either the shoot button or the bomb button. Doing this should allow you to play as the Judge Spear.

Play as Raiden MKII
At the ship selection screen, push down from either the Aegis or the Beast Arrow (do not move to the Chaser) . Then move to the Endeavor. From there, press and hold right which should bring you to the question mark. While still holding right, press either the shoot or bomb button, and the Raiden MKII should be selected.

Slave Ship
Select any ship, if the ship is on top, hold up and if the ship is on the bottom, hold down. Then press start + fire button + bomb button at the same time to unlock the Slave ship. The ship's speed depends on what ship you're using.

Unlock All The Ships:
To unlock all the ships, go to the machine's Test Menu. Enter "Game Settings", change everything to 9 on "Shooter1 Coin/Credits" and "Shooter2 Coin/Credits". Also turn On "Free Play". Now exit that menu and go to "I/O Test". Hold the Test and Service button and repeatedly press the 2nd player's Start button. If done right, you should see the "Days of Operation" counter increasing. Set it to over 140. Exit that menu and reset the "Shooter1 Coin/Credits", "Shooter2 Coin/Credits" and "Free Play" if you wish. You can now exit the Test Menu altogether and reboot the machine. If done right, all the ships will be selectable.

Access The Slave or Fairy
Hold ''Bomb'' button before inserting coins. Keep pressing ''Bomb'' button until after you finish typing your initials. At the "Fighter Selection Screen," press the ''Fire'' button while still holding the ''Bomb'' button to select the Slave. It doesn't matter which plane you highlight.
*Note : If you highlight the 'flying blue pig', you'll get the Fairy instead.